Evident signs of the mining and archaeological past of this enchanting area, enclosed between the sea and the mountains, have now become a great tourist attraction, amidst bright colours and a working-class past that will fascinate anyone who ventures into these lands.

The municipality of Rio was established in 2018 by the merger of the two municipalities of Rio Marina and Rio nell’Elba, and is located on the eastern side of Elba.
The hamlet of Rio Marina is set in a small sea inlet surrounded by hills whose soil, red from iron oxide, bears witness to its rich mining past.
In this part of the island, iron has been mined since the time of the ancient Etruscans and, together with fishing, was the main activity of the inhabitants until a few decades ago. Today, Rio’s mining past has once again become an important attraction for the island’s tourism, so much so that the stretch of coastline from Rio Marina to Cavo has been named the “Costa che brilla” (“Shining Coast”), in honour of the almost dreamlike glitter of the black mining dust on some of the beaches, which distinguishes its appearance.

There are many places of particular historical and cultural interest that you can discover in Rio Marina: among these are the Church of San Rocco, the 16th-century Clock Tower or Appiani Tower, the Giove or Giogo Fort. The Mineral Park, with its extraordinary open-air mines and the Mineralogical Museum, are worth a special mention.
Rio Elba, on the other hand, is a small town perched on a hill about 170 metres above sea level, and is one of the oldest towns on Elba, as its origins go back as far as the Bronze Age. The area retains many traces of its ancient past, and among these are archaeological finds and shipwrecks from different eras, which you can discover at the Archaeological Museum in the centre of the village, where a wide variety of minerals are also kept.
Other places of historical and cultural interest are the Hermitage of Santa Caterina and the Orto dei Semplici, the Church of the Holy Trinity, known as the Church of the Padreterno. The small island of Cerboli, a naturalistic gem of the Tuscan Archipelago, is also part of the municipal territory.
A few steps away from the historic centre is the charming Fonte dei Canali spring water source, which has recently been restored, and the Public Washhouse, a suggestive structure with a trussed ceiling and large windows, used until the 1980s.
Between the Fonte dei Canali and the Public Washhouse, it is also possible to visit the Rio Park House, open from April to October, managed in collaboration between the Municipality of Rio and the Tuscan Archipelago National Park. As well as providing information on the area’s flora and fauna, the facility also organises free guided walks, nature excursions and specific events linked to the Walking Festival. These are unmissable experiences, allowing visitors to explore hidden corners of Elba and breathe in the magical atmosphere.

The Museum System in Rio 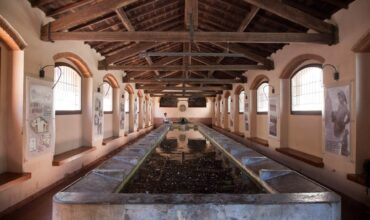 Archaeological Museum of the Mining District